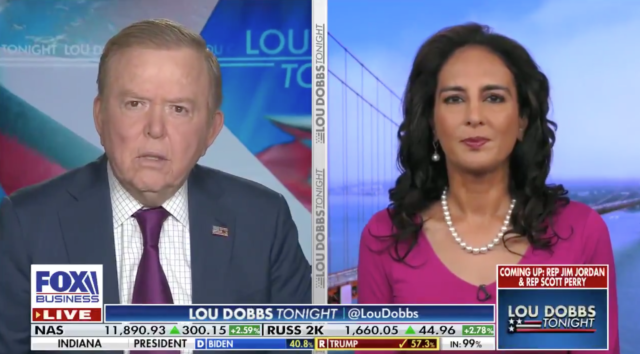 Sure. Well, I will tell you that in Pennsylvania we have hundreds of lawyers, mostly volunteer lawyers, on the ground. They’re fighting hard, and they have been since before Election Day. So no worries that we are short on resources there. This morning the court of appeals there in Philadelphia ordered the Philadelphia elections officials to allow are are – to allow republicans access to witness how the ballots are being handled, and Philadelphia officials are in contempt. They are ignoring that court order and going on with the counting without republican election monitor there is to witness it. The kind of shenanigans that can occur in Philadelphia, by the way, you have election workers with Biden/Harris 2020 masks on, and they’re the ones who look at ballots, and they see if a ballot is defective in some way. They may fill it in or fix it, and there’s nobody on the republican side to witness it. And because that election is so close, because the president’s lead is declining, that is where we can lose it, and it is an outrage that those people are in contempt of court and, meanwhile, we’re waiting for the United States supreme court which the president has nominated three justices to step in and do something and, hopefully, Amy Coney Barrett will come through and pick it up. There’s no guarantee of that, Lou, so we have to fight this on the ground.

Well, so it may be overblown in the media, but basically the president’s campaign moved to intervene in the existing lawsuit that you just described, and the state was ordered to respond to the motion to intervene. So all that is is whether the president gets to be a party or not. Whether – however that goes, the case is still there, and the original plaintiffs can still press that case if the supreme court takes it up. But just in case, we have it on a belt and suspenders, and there’s also a federal civil rights lawsuit filed today in Pennsylvania to challenge the irregularities that include all of the issues in the supreme court case that include the new issues of barring republican poll workers from being able to watch what’s happening there. Poll watchers, rather, to be able to watch what’s happening, witness irregularities and document and challenge them. Still left to be determined, Lou, is when those ballots that the court ordered segregated from Wednesday through tomorrow at 5:00, are they going to be counted or not. We’re not going to see a determination of that. And in some counties, the counting doesn’t even start until a little later on those types of issues. So that issue hasn’t been joined yet.

Yes, that is a concern. The Trump campaign did file a lawsuit there in Georgia, and it had an affidavit that alleged that 53 late absentee votes were mixed in with the rest of them and were being counted, and the judge gave that the back of the hand today and dismissed the case saying there wasn’t sufficient evidence to prove that those ballots were lawsuit. I mean, on the one hand we’re being kept, you know, far, far away from the voting and not being able to see the ballots being opened, on the other hand, the judges are saying, oops, you don’t have enough evidence. We’re not magicians. In Michigan democrats are being allowed to monitor the ballot counting or 3-1 or 4-1 and republicans aren’t. That’s literally happening in our country, and that is third world level nonsense. And it is disgusting that it’s happening here in America, Lou.

The DOJ is MIA, I’m sorry to say, because our – we have an assistant attorney general for civil rights who’s supposed to be in charge of elections and, you know, you to don’t know who he is because he’s never done anything in this regard over the last four years. It’s very unfortunate.

Well, we’re the still on a positive trajectory in Arizona. We believe we have good arguments in Nevada which you covered in the earlier segment, and finally in Pennsylvania we are still ahead, and we have a chance to get into the courts there if necessary.